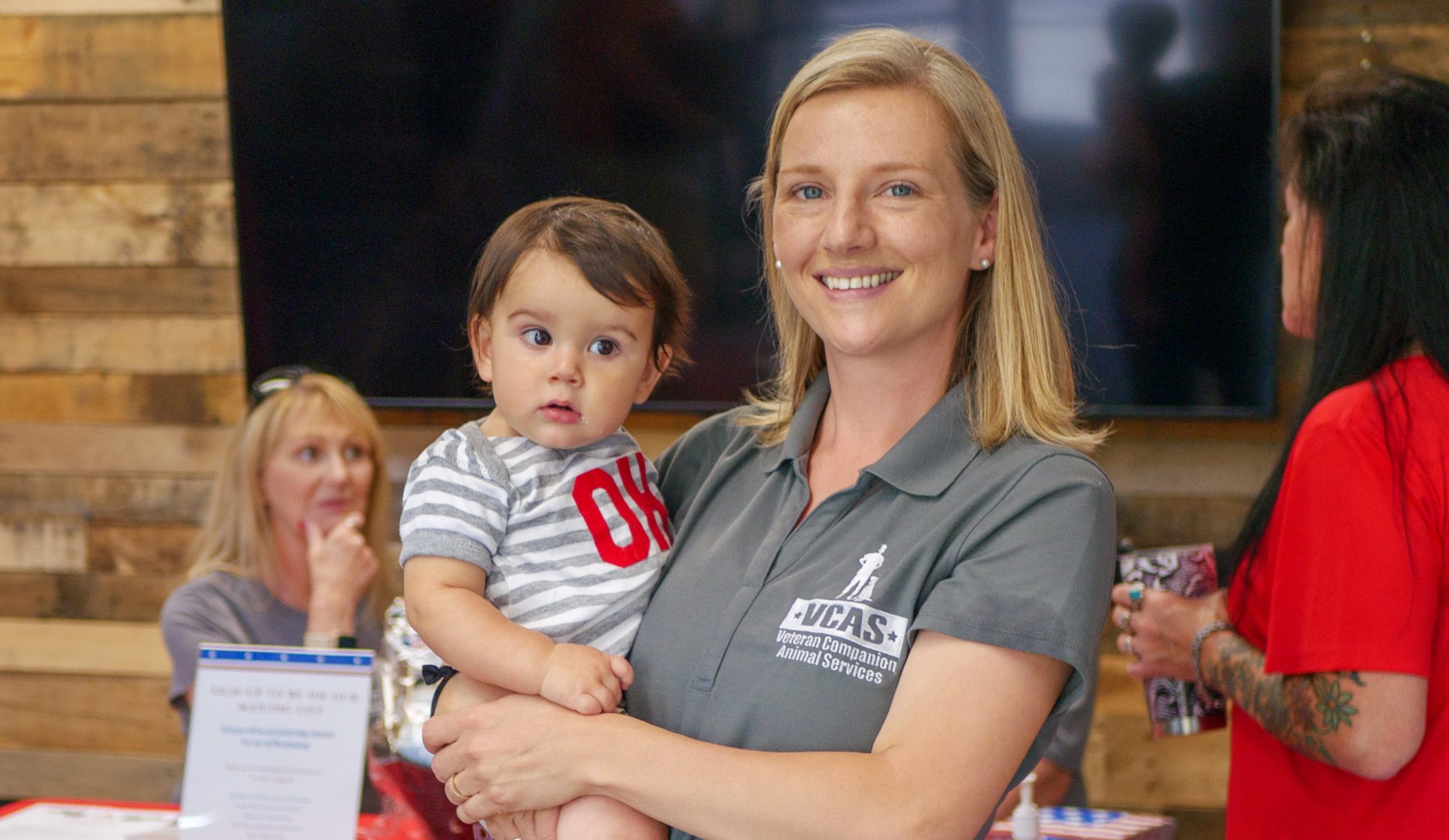 Dr. Heather Lane Announces Her Transition and Excitement for the Future of VCAS

Veteran Companion Animal Services (VCAS) Founder and President/CEO, Dr. Heather Lane, has announced she will be transitioning into a “Founder’s Role” in 2022. Dr. Lane founded VCAS in 2013 and has been successfully building, leading, and growing this mission over the past 9 years.

Dr. Lane is excited to welcome her successor, being able to present the new President/CEO with the organization in its best and most impactful condition ever. Over the past several years, Dr. Lane and the VCAS team have focused on building an organization based on nonprofit best practice principles that are sustainable; the organization will continue to be a source of relief for veterans and purpose for rescue dogs for many years to come.

“It was Heather’s vision that drove VCAS into existence and her enthusiasm for helping veterans and dogs that made VCAS successful. Heather’s dedication, tireless work, and commitment allowed for VCAS’ dramatic expansion from a single-person operation to a charity with a 12 member Board that will place 12 dogs with veterans in need this year. VCAS’ Board applauds Heather’s work over the last nine years and recognizes the enormous impact she’s had not only on VCAS but countless veterans and their families in our community.

Heather’s work as President improved everyone’s lives around her and she will be difficult to replace. VCAS thanks Heather for her service and wishes her the best of luck in her future endeavors.” said Board Chairperson Bryan Pritikin.

Dr. Lane will continue to play a key role in the story of VCAS, taking on a “Founder’s Role” where she can best support where her talents are needed most. Dr. Lane will be passing the baton to retired Captain Tom Lennon, USN (Ret) on February 28th who will serve as Interim President/CEO until a successor is selected. Lennon has been a key volunteer for VCAS for over two years, leading veteran relations. Tom is familiar with the day-to-day operations and goals of the organization.

“Although this was a big decision, guided by a lot of thought and prayer, I am so excited to confidently move VCAS forward in this way; it is the right time for VCAS to welcome a new President/CEO. I have been blessed to have been called to this work and I am excited to passionately serve in a new capacity. VCAS truly has the most amazing Champions, a strong Board and the best volunteers in the world- I can’t wait to see where VCAS goes in the coming years!” – Dr. Lane

The VCAS Board of Directors has appointed a Search Task Force and is working with The Pulliam Group, LLC to execute the search for the next President/CEO. Dr. Lane decided to make this transition so that she could spend more time with her son Raymond who is now 15 months old and can no longer crash at the office for extended periods of time.

The position posting can be found on the VCAS website at VCAScharity.org on Tuesday, January 25th. Resumes and cover letters can be submitted to apply@VCAScharity.org

Procedural inquiries can be sent to The Pulliam Group at DeanPulliam@gmail.com

History and Impact of VCAS

Dr. Heather Lane started VCAS after seeing many instances where veteran’s lives were greatly impacted by their pets. Dr. Lane had several family members that served and all of them had a dog, or two, that made every day better. While working at veterinary clinics, many veteran clients would open up about just how much their dog meant to them. Oftentimes, spouses would secretly share if not for the dog, their significant other wouldn’t be here. Through vet school, Dr. Lane became passionate about One Health, the concept that human, animal and environmental health are all related, and the benefits of the human-animal bond. When a tragedy occurred with a family member struggling with mental health, Dr. Lane felt God’s calling to work in the space of improving human lives through animals. With a heart for veterans and a solid belief in the healing power of dogs, Dr. Lane, with the help of her husband Chris Macisco, began the process of starting Veteran Companion Animal Services.

VCAS’ articles of incorporation were filed in 2013, 2013-2014 was the research/discovery phase and initial board development, 2015 VCAS submitted for and received their IRS 501(c)(3) determination, and programs were launched in 2018.

VCAS currently has three programs that include placing rescue dogs with veterans, dog training for veterans and their dogs, as well as an alumni program for past participants. To date, VCAS has completed 14 rescue dog placements and served over 50 veterans and military families through its programs.  VCAS plans to place 12 dogs in 2022 and begin to expand its services beyond central, Ohio.

A note from Dr. Lane:

The past year for VCAS (2021) has been absolutely incredible! We have served more veterans than ever before, grown as a team, solidified practices, and with your support, raised more than double what was contributed in prior years. We have smashed goals, drastically changed (and even saved) lives and built an organization with a rock solid foundation. I have never been more excited about the future of VCAS and the impact it is making every day, and will continue to make, in the lives of our incredible veterans and rescue dogs.

While this past year has been wonderful in many ways, I have personally felt a subtle pull on my attention. Thanks to prior experience with this feeling, I knew I needed to pay attention, and have spent many months thoughtfully considering and praying about what I was to do. Well, I am excited to share my answer with you. At the end of February I will be transitioning out of my role as President/CEO and moving into a “Founder’s Role.” As many of you know, I am the mom of little 15-month-old Raymond and I want to give him everything I can during these early years. I also want to give VCAS the absolute best that I can offer, which is A) bringing on a new President/CEO and B) supporting VCAS in the best ways possible as Founder.

At this time, I am enjoying the chance to train Captain Tom Lennon, USN (Ret) on the duties of the President/CEO position; he will become Interim President/CEO starting February 28th. Our dedicated Board of Directors is currently in the process of organizing a Search Task Force and will work with The Pulliam Group to identify the next President/CEO. Through our awesome staff and volunteers, we anticipate no changes to our day-to-day operations or service to our veterans and dogs; VCAS expects to match a record number of veterans and dogs this year! We are all committed to a seamless transition, which will continue to grow the important mission of VCAS and support our Champions who make it all possible.

Over the past nine years (wow, it’s really been that long!?) I have learned and grown so much through the VCAS journey. Starting a nonprofit is no small task, as I found out. I want to send a very special thank you to all those who have given me encouragement, coaching, guidance, and at times, a shoulder to cry on over these years. I have been beyond blessed to get to know and work with some of the most wonderful people this world has to offer – our American heroes and all those who care so deeply about them and make organizations like VCAS possible.

God has never led me astray and He’s always been with VCAS – in fact it was His idea from the beginning.

So although a little bitter sweet, I am beyond excited about this transition, not only for my personal life, but also for the future of VCAS! I look forward to the impact of the years ahead and am grateful to be a part of this incredible organization in a new role.